This TwinNote website is no longer active and has been effectively archived. See Clairnote music notation, more info.

TwinNote 5L is an experimental version of TwinNote that uses a five-line staff (5L). Try out several variations of it on the TwinNote Labs page for Alternative Versions of TwinNote. 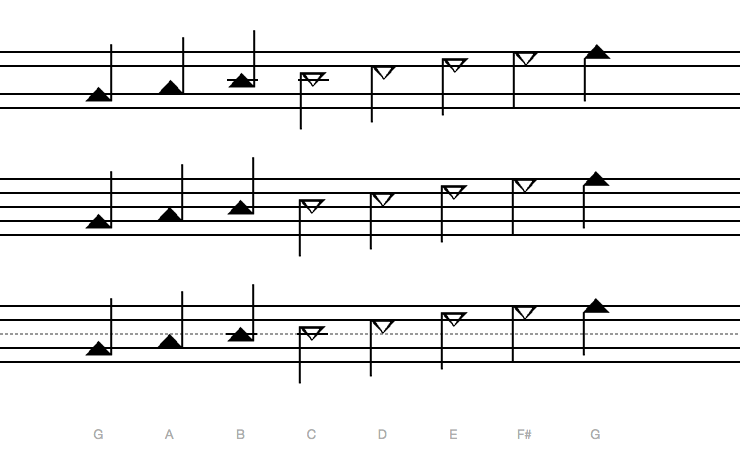 On this page TwinNote is shown with its original straight triangle note head font.

In one variation of TwinNote 5L the staff has five solid lines, and in another the middle line is lighter, thinner, and/or dotted (called simply the “dotted-line” variation below). In all other respects it is identical to standard TwinNote. Advantages and disadvantages are discussed below.

Looks the Same as the Traditional Five-Line Staff

The greater visual density of a five-line staff would mean a greater chance for musicians to mis-read a note, perceiving it to be on a different line or space than it actually is.  It would be the same as traditional notation in this respect — no worse, but no better either.

One of the strengths of the standard TwinNote staff is that each octave looks the same since the groups of two lines cycle with the octave.  Notes an octave apart clearly resemble each other, making the staff easier to learn and the notes easier to identify.  For example, the note E is always on the bottom line of the two line group.

A five-line staff spans two octaves, so notes an octave apart do not resemble each other to quite the same degree, although the dotted-line variant is much better in this respect than the solid-line variant.  The note E appears on the first and fourth lines of the staff.  There would still be much greater consistency in this respect as compared to traditional notation — line-notes would always appear on lines, and space-notes on spaces, regardless of the octave, and a note’s shape (upward or downward triangle) would be the same in any octave.

A five-line, two-octave staff would only be marginally more difficult to learn since the top half is the same as the bottom — a pattern that is much easier to see in the dotted-line variant.  (If the solid-line variant was preferred, then the dotted-line variant could be used as an educational tool for beginners to help them learn to see that the top of the staff is identical to the bottom.)  Also consider that there is only one staff to learn, as compared to learning bass, treble, etc… in traditional notation.

Five consecutive lines establishes a regular, consistent pattern much more so than two lines does. It may be easier to read music from a consistent, symmetrical, broad “field” of five lines instead of two groups of two lines with a gap between them. You could argue that this gap spans A, A#, B, C, C#, and D which is six of twelve semitones in an octave, four of the seven notes in most diatonic scales, so basically half of all notes appear in the gap (or above or below the staff).

A five-line staff might be better for perceiving intervals, the vertical spacing between notes. If an interval spans part or all of the gap in the middle of the standard TwinNote staff, the distance between the notes is not as easy to perceive at a glance as it would be in the five-line version. (This could be addressed by having the ledger line appear in the gap when an interval spanned it, or perhaps even when any note appeared in the gap, but that would mean having a lot of ledger lines.)

This is a very minor point, but the placement of the octave break in the middle of the staff (the ledger line representing B and C) does not impact all keys in the same way. For example, works in the key of C would be more aligned with the two staff lines, whereas works in the key of G would be stretched across the gap, to a greater extent, or in a different way. In this sense, a five-line staff would offer some more consistency across different keys.

Optimize for Intervals or for Individual Notes?

The five-line staff arguably offers clearer representation of intervals, while the standard TwinNote staff makes the identity of individual notes clearer. So maybe it is a question of which should get the higher priority?

If it is not that much harder to learn to read the five-line staff (especially since the top half matches the bottom), would the advantage of the standard TwinNote staff diminish in time, after a musician had learned the staff? It is a simpler operation to identify a single note than to recognize the interval relationship between two notes, so a staff that makes it easier to do what is more difficult (interval recognition) might provide greater advantages in the long term.