This TwinNote website is no longer active and has been effectively archived. See Clairnote music notation, more info.

TwinNote has its own alternative accidental signs that it uses to indicate:

They do not indicate to the musician that they should play the following note higher or lower like traditional accidental signs do. They simply clarify the names of accidental notes but do not affect their pitch.[2] It is possible for a musician to ignore the accidental signs and still play the correct notes in TwinNote.

Above is an illustration of two pairs of enharmonically equivalent notes — notes like the black keys on a piano that have different names but have the same pitch (in 12-tone equal temperament[2]). In TwinNote it is much clearer that they have the same pitch. The alternative accidental signs simply indicate their different names but do not affect their pitch. Differentiating between enharmonic equivalents using TwinNote’s accidental signs and Key Signatures makes it possible to use the standard Names of Notes and Intervals.

TwinNote’s accidental signs remain in effect until the end of the measure in which they appear, just like traditional accidental signs. In TwinNote fewer accidental signs are needed as compared with traditional notation since twelve different notes have their own representation on the staff instead of just seven. Cancellation accidentals (that override a previous accidental in the same measure) would be much rarer in TwinNote. The following measure containing alternating D natural and D sharp notes illustrates this point.

Traditional natural signs can be used to indicate natural notes that are outside of the current key, just as in traditional notation. For example, a B natural note in the key of B flat.[3] Double sharps and double flats are indicated by simply doubling the alternative sharp and flat symbols:

Here is an illustration of an ascending and descending chromatic scale in TwinNote and traditional music notation. All of these illustrations were created using LilyPond. 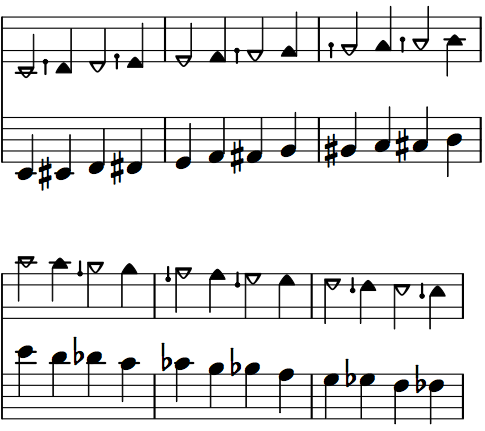 Next: Names of Notes and Intervals